That will be much more difficult.

Viewed against the spotlight-basking Tesla or SpaceX, Musk’s private neurotech start-up Neuralink, which aims to cut small holes in patients’ skulls and insert brain implants in them, often fades into the background. Yet it is the moonshot firm that has prompted some of the entrepreneur’s biggest boasts — and might yield some of his strongest head winds.

Stronger, even, than a certain social media firm.

“I think he’s ultimately going to have a much harder time with Neuralink than he’ll have with all his other companies, including Twitter,” said Anna Wexler, a close observer of Neuralink and principal investigator of the University of Pennsylvania’s Wexler Lab, which focuses on emerging technology. “Medicine just has so many obstacles you don’t have in other areas, and it’s not clear he recognizes that.”

Neurotech is fraught enough that Meta bailed on its long-running investment in a mind-reading device last year, before its first implant.

Even as he was cranking the volume on his Twitter interest in April, Musk was touting the epic-ness of his “brain-machine interface,” or BMI — the tantalizing idea of a brain sending instructions directly to a computer. Musk said at Ted2022 that for much of the next decade, Neuralink will produce a medical wonder-tool that can cure paralysis and also “solve a very wide range of brain injuries including severe depression, morbid obesity, sleep, potentially schizophrenia — a lot of things that cause great stress to people.”

Scientists not only eye-roll such talk as standard Muskian hype but say that it deliberately ignores highly specific challenges not found in any of his other businesses. Wexler and others note that ethical and publicity pitfalls, the slow pace of trials, scientific uncertainty and even a 14-year-old competitor named Blackrock Neurotech could ensure it’s nearly a decade before any Neuralink product is mass-distributed, let alone effectively cures the ills Musk describes. They also look askance at the idea that a tech magnate who’s clashed with agencies such as the Securities and Exchange Commission is going to fit comfortably in the regulation-heavy business of medical treatments.

Yet the story is instructive not only for what it says about a freewheeling executive confronting a safeguard-heavy system but for what happens when a niche corner of science has a light thrown on it by a social media celebrity. All that wattage has created a divide within the neuro community. Is Musk a strange bedfellow they can live with to save people? Or a distraction whose hype will undermine critical research?

“The simple truth is, whether academics or entrepreneurs want to accept this, a lot of people would not be talking about neurotech had Elon not made this his focus,” said Marcus Gerhardt, chief executive and co-founder of the Utah-based Blackrock.

But, he added, the hype was also dangerous. “If you send a sporadic message, on the spur of the moment, to patients and get their hopes up, it’s irresponsible no matter how you try to turn it.”

Ed Niedermeyer, the automotive analyst who wrote a book about Musk and Tesla, said that Neuralink is “a perfect example of what Musk does — make claims that are so extravagant he hopes you won’t spend much time thinking about them.”

BMI tech works by “recording” brain signals via electrodes implanted in the brain. That recording then allows an algorithm to combine all the signals and transmit them to a computer — potentially allowing paralyzed people to walk again via a robotic limb, or ALS patients who can’t speak to type instructions for a computer-generated voice.

While meaningful signals are generated by 100-200 electrodes (Blackrock’s amount, via the “Utah Array” approach), Neuralink captures 1,024 electrodes per implant, via a breakthrough “sewing” technique. Licensed from University of California at San Francisco research, it involves the stitching together of many electrodes in a polymer thread. An implant is the diameter of a quarter, but five times thicker.

Neuralink was founded in 2016 but little publicized until a streaming event three years ago. Musk’s current boasts that he could make tetraplegics walk again are in fact a reining in of his promises then; at that presentation, he went far beyond medical uses to pledge that Neuralink’s devices could “achieve a sort of symbiosis with artificial intelligence” and “ultimately help secure humanity’s future as a civilization relative to AI.”

Musk has talked less about AI-melding recently (scientists say it is, at best, many decades away) but has kept the hype machine churning. “Short-term: solve brain/spine injuries. Long-term: human/AI symbiosis,” he tweeted in January 2021. Last April, Neuralink released a viral video that showed a monkey playing Pong with its mind. It set the Internet ablaze with 6 million views and dozens of awed news articles.

But publicity coups have sometimes come with crisis.

In February, Neuralink acknowledged that at least some of its 23 experiment monkeys died, after the animal rights-minded Physicians Committee for Responsible Medicine sent a letter to USDA alleging “apparent egregious violations of the Animal Welfare Act.”

The group said the monkeys “had their brains mutilated in shoddy experiments and were left to suffer and die.” Neuralink has denied the charges, saying it was “absolutely committed to working with animals in the most humane and ethical way possible.”

The company has also faced staffing challenges. Neuralink’s longtime executive Max Hodak left last year amid reports he was uncomfortable with Musk’s accelerated timelines for new products. Six of the eight original scientists — many from UCSF, including a highly touted researcher named Philip Sabes — have also left the firm. Sabes and Hodak did not reply to requests seeking comment.

Requests for comment from both Neuralink and Musk were not returned.

FDA approval for implantable medical devices is a deliberate process, aimed at laying down every speed bump before doctors are allowed to surgically implant machines. Musk’s M.O., though, is to move fast and crack china.

Musk initially said he would start human trials by the end of 2020, then postponed to 2021. In January, he said he was hiring a director of those trials to begin this year; no such director has yet been announced.

Meanwhile, neuroscientists question the company’s prowess as a research center, noting that the MindPong video was essentially executed by researchers nearly 20 years ago. “They are a great engineering company, making smaller, slicker products that are wireless and use Bluetooth and so definitely a step forward,” said one neuroscientist at a top university who spoke on the condition of anonymity so as not to jeopardize future relationships with Musk. “But they are not a research company, and it is testament to how good a publicist he is that much of the country doesn’t realize that.”

And while 1,024 electrodes implanted in the brain instead of a couple hundred is an advance, neuroscientists say, it offers no demonstrable edge in human-mobility applications; Blackrock’s decade-old tech can basically do the same thing. That company already has FDA-approved devices implanted in 31 patients in trials around the world.

Blackrock also articulates more measured timelines — that a wide commercial rollout of implants for paralysis, say, could be at least five years away, and implants for stroke and Parkinson’s patients a decade or more away.

“It feels like there are two companies basically doing the same thing. One is doing it the right way and Elon Musk is doing it the wrong way,” said Laura Cabrera, an associate professor of engineering science and mechanics at Pennsylvania State University who follows neurotech companies.

She particularly questioned human trials and how a company with few formal ties to medical institutions could convince people to let it insert devices in their brains.

Another neuroscientist who spoke on the condition of anonymity worried that bold promises left unmet could also over time dampen public and investor interest, and even choke off lifesaving research.

Musk has undeniably propelled a wave of capital so far. Neuralink has raised at least $363 million in venture investment, including $100 million from Musk and an undisclosed sum from Google Ventures. Shortly after the MindPong video, Blackrock announced a $10 million venture round, its first, including an infusion from the venture-capital provocateur Peter Thiel. Two months later, Musk, Thiel’s PayPal co-founder, announced Thiel had also invested in Neuralink.

This marks a sea change. After the collapse of a groundbreaking company called Cyberkinetics in the late 2000s (Blackrock acquired and is founded on its research), funding for neurotech essentially dried up until Musk came along.

“Companies, Neuralink and otherwise, that are playing in this space make me feel very grateful,” said Paul Nuyujukian, director of Stanford University’s Brain Interfacing Laboratory and one of the field’s founding pioneers. “Because it validates everything the academic community has been doing for so many years and paints a picture of the promise of this field for improving medical outcomes for people with significant brain disease.”

He said he was troubled, but only slightly, by the kind of far-off speculation offered by people like Musk. “Vision is good. You need to have vision to be able to reach a goal. It’s the making of promises that I think is dangerous because you can mislead the public.”

“We just need to make sure,” he said, “that, when we’re laying out a vision of where we’re going, we’re also being honest about where we are.”

Jeremy B. Merrill contributed to this report.

Thu May 5 , 2022
Corey Morris is the Chief Strategy Officer at Voltage–an award-winning digital agency focused on marketing, websites and branding. getty You want to rank better on Google and have decided to invest in SEO. If you’re not trying to do it yourself or hire someone for your team, you can find […] 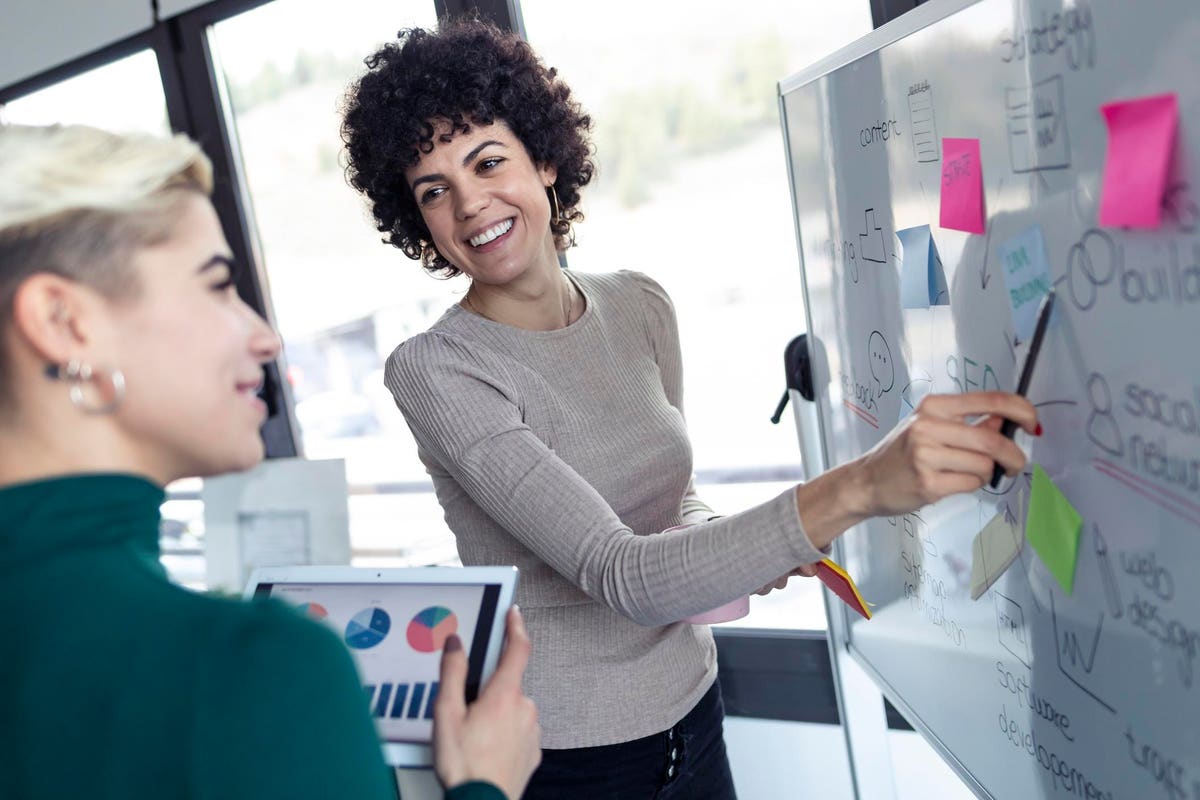